Mr. B, a Brazilian citizen and an employee of a Brazilian company, was sent to work for a Chinese subsidiary from April 2021 onwards. Due to the travel ban caused by pandemic control measures, he had to work remotely from Brazil from April through July until arriving in China in August 2021.

From April 2021 onwards, he was remunerated and his China individual income tax (IIT) withheld by the Chinese employer.

Later, his Brazilian employer, when applying for the foreign tax credit, was surprised to learn from the Chinese tax authority that the tax refund was not available during the period when Mr. B was residing and being taxed in Brazil. As a result, the Brazilian company had to bear the IIT cost, being roughly 10% of his annual pay.

One should refer to the Announcement [2019] No.35 released by the State Administration of Taxation (SAT) for assessing the taxability of non-residents in three scenarios: working for only a Chinese employer, only for a non-Chinese employer, or both (see the table below). 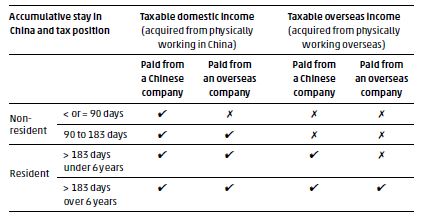 Under China’s current IIT regime, the source of remuneration of a non-resident is based on neither the place of payment nor the location of the payer, but on the actual place of work, meaning that his/her income would be considered China-sourced if his/her services are physically provided in China.

By the same token, though hired and paid by a Chinese company, Mr. B’s income should be treated as foreign sourced due to his working outside China (from April to July 2021 in the example above). The four-month pay should not be subject to China IIT unless his accumula­tive stay in China during a single tax year has reached 183 days.

The Announcement further explains that, for a non-domiciled individual who is employed simultaneously both domestically and overseas, if he/she works both in China and over­seas, his/her domestic-sourced and foreign-sourced salaries should be taxed proportional­ly per the ratio of the number of domestic days to overseas days.

Indicating that the said days-in / days-out allocation applies only to individuals either employed both in China and abroad or employed only abroad but working both in China and abroad, the Announcement has implicitly ruled out its application to those employed exclusively in China. Thus, theoretically for them, all income paid due to sole employment with the Chinese company should be taxed in China.

A tax refund is a reasonable entitlement but it could be in vain when put into practice. Expatriates who are employed in China, if in a similar situation, are advised to clarify beforehand the feasibility of tax refunds in China or tax exemption in their home country.