23.5 % of total gross electricity generation in Germany comes from wind energy. Compared to 2010, this is almost a fourfold increase and the share continues to rise steadily. However, there are many hurdles to overcome when implementing wind farm projects: Lack of land, long and above all complicated approval procedures, as well as a wide variety of reporting requirements that are difficult to comprehend. This considerable bureaucracy hinders and slows down the expansion of wind power in Germany. In order to dispel uncertainties regarding the applicable reporting obligations, this article explains the electricity tax obligations for onshore and offshore wind power plants.

Anyone who operates wind turbines in Germany and feeds the electricity generated into the grid is considered a supplier under German electricity tax law, as electricity is supplied to third parties. For this reason, a permit as a supplier must be applied for at the locally responsible main customs office before commencing operations.

Operators of wind power plants are usually classified as so-called limited suppliers. In this case, the official forms 1412, 1410a,1410az must be submitted to the competent main customs office for registration. Attention! Anyone who withdraws self-generated electricity for self-consumption or supplies it to third parties without prior registration is generally obliged to submit a tax declaration immediately and to pay the tax due without delay!

B. Self-generation with permission

Those who wish to make little effort require a formal permit for the tax-exempt extraction of electricity from renewable energy sources in accordance with § 9 Art. 1 No. 1 Electricity Tax Act (StromStG). This permit must be applied for on the officially prescribed forms 1421, 1421a and 1421az at the main customs office. According to this, only annual declarations of the tax-free self-consumed electricity quantities must be submitted. This reporting is made on form 1400 and must be submitted to the main customs office by 31 May of the following year. In general, electricity tax payments can be avoided by following this procedure.

C. Own generation without permission

If there is no permit for tax-privileged consumption of self-generated electricity, the electricity quantities withdrawn for self-consumption must be declared on the officially prescribed form 1400 by 31 May of the following year. The accruing electricity tax must be calculated therein and paid by 25 June of the same year at the latest.

In this case, the tax burden can regularly be offset by the subsequent submission of tax relief applications. The tax relief for electricity from renewable energy sources can be applied for until 31 December of the year following the electricity withdrawal. The official form 1470 must be used for this tax relief, regardless of the size of the installation. The application for relief must also be accompanied by the self-declaration on state aid on official form 1139, if this has not yet been submitted for the corresponding application year.

Insofar as the tax relief is submitted at the same time as the tax return, an outflow of liquidity can often be avoided by submitting a set-off request.

According to the Electricity Tax Act, the use of electricity in the German tax territory is subject to electricity tax. The tax territory is defined as the territory of the Federal Republic of Germany without the area of Büsingen and without the island of Helgoland. As a coastal state, the Federal Republic of Germany claims a 12-nautical-mile zone from the coast as its territory in addition to the continental shelf. German offshore wind farms, on the other hand, are generally located in the North Sea and Baltic Sea within the adjacent 200-nautical-mile economic zone.

Electricity from wind turbines generated in this area and taken for self-consumption at the place of generation is not subject to electricity tax in Germany, as the electricity is taken from the supply grid outside the German tax territory. Thus, it is not necessary to apply for permits for the tax-free withdrawal of self-consumption. On the other hand, registration as a supplier may be required insofar as electricity is supplied to third parties in the tax territory.

Registration portal for the Energy and Electricity Tax Transparency Ordinance

Since the tax exemptions and tax reliefs for the own generation from renewable energy sources are considered as state aids, they must be reported annually to the customs administration by 30 June of the following year if necessary. According to the Energy Tax and Electricity Tax Transparency Ordinance (EnSTransV), only those beneficiaries are affected by the obligation to report whose volume of benefits exceeds 200,000 euros in a calendar year. 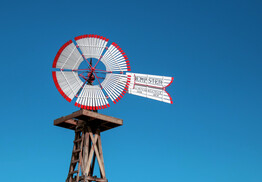